I started my career as a journalist, writing articles for newspapers and magazines, primarily about food of all subjects. People actually paid for me to dip things into sauce! It was pretty amazing.

After leaving my position as a contributing writer at the City Paper, I moved into the digital sphere, serving as the editor-in-chief of Best Chefs America, a peer reviewed compendium of the best chefs in America. I also launched and served as the lead writer and managing editor Marmalade Magazine - an online food and style magazine for bold women.

But eventually, even dipping things into sauce and describing the experience became repetitive. So I decided to embark on creating something more meaningful - an in-depth journalism expose on arguably the most ridiculed people in America at that time ... the members of my generation.

After completing 5 years of ethnographic research, I completed my debut original book concept, The Millennial's Guide to Changing the World, which was internationally released in 2018 through Skyhorse Publishing and represented by the Nancy Owen Barton Literary Agency.

My articles have been published in The Huffington Post, Mic, Elephant Journal, Rebelle Society, WNC Woman Magazine, The Intentional Quarterly, Numundo, and more. Beyond short form writing, I have served as the editor and ghostwriter for multiple privately-commissioned self-published book concepts.

While pursuing journalism, I ventured into the copywriting sphere - helping socially-aware start ups perfect their messaging through creative consulting, and using my gift of writing to create business documents, investor decks, websites, marketing kits, and more to launch their concepts into the world.

Supporting visionary entrepreneurs in expressing exactly what they are and hope to accomplish through killer copywriting that turns strangers into believers is now a central focus of my work. I also use these skills in my own entrepreneurial endeavors and online courses - which cover topics ranging from publishing to intergenerational reconciliation to holistic studies. 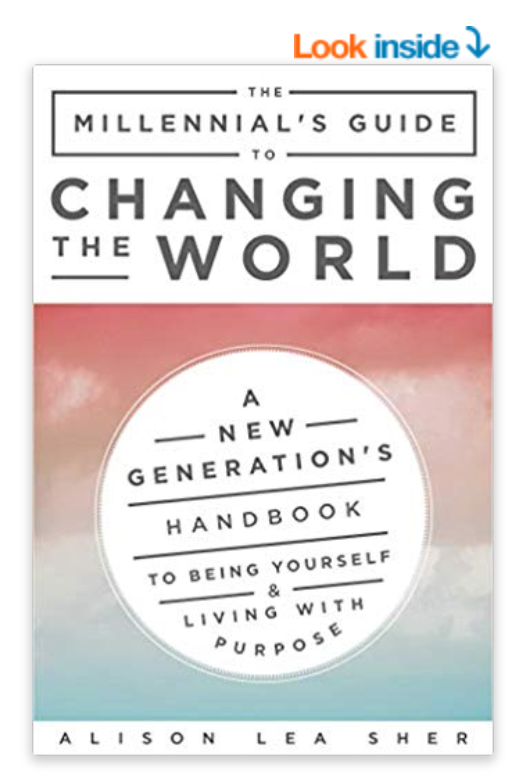 "The Millennial's Guide to Changing the World is heartfelt, discerning, candid, comprehensive, and stubbornly hopeful. It's exactly what we need in a roadmap to the future."

"The message behind this is so amazing!”

"Funny, engaging, and timely! Where was this book when I was coming up?!"

—Jed Emerson, author of The Purpose of Capital, founder of the Blended Value Group

"Alison Sher is a force of nature, which is reflected in every page of this book."

—Chip Hauss, fellow of innovation at the Alliance for Peacebuilding

"I have never encountered another writer like Alison Sher. Her voice is immediate, sharp and clear, and full of life; her vision is like no other I have encountered, either, landing on the smallest yet most telling detail with a kind of delicacy and strength that makes details sing. I love her writing. Period."